Perspectives on Photography – Panel Discussion this Friday, May 20, 7p.m.@the DIA 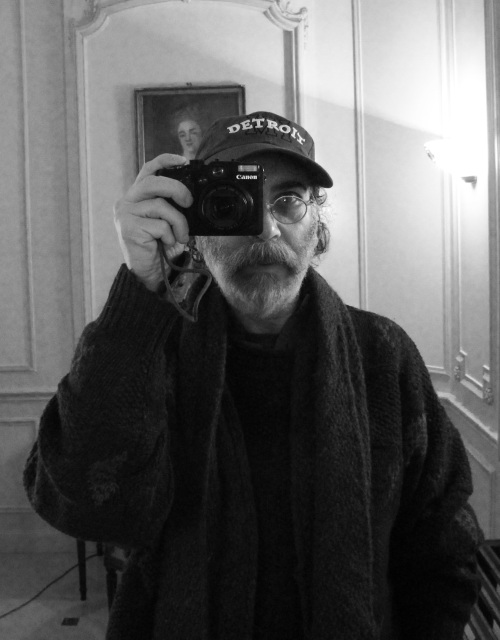 Detroit's Cary Loren will weigh in on photography this Friday at the DIA. (c) Cary Loren, 2011

What does it mean for a photograph to be authentic? How does the so-called manipulation of photographs influence our perception and understanding of medium? What is the value of learning to “read” photographic images? A panel of Detroit-area photographers, arts professionals and educators will meet to discuss these issues during the program Perspectives on Photography: Authenticity, Invention and Image  which takes place this Friday, May 20, 7 p.m. at the Detroit Institute of Arts, Lecture Hall.

Please join DIA Associate Curator Nancy Barr and moderator Leonard Walle, collector and president of the Forum for Prints, Drawings, and Photographs who will engage panelists in dialogue. Participants include Kyohei Abe, artist and director of the Detroit Center for Contemporary Photography; Michelle Andonian, editorial and documentary photographer; Sara Blair, University of Michigan professor and author; Cary Loren, author, artist, and musician; and Corine Vermeulen, photographer and 2009 Kresge Fellow. A Q&A will follow the panel discussion.

This event is free with museum admission. This program is sponsored by the Forum for Prints, Drawings, and Photographs.

A Few Recent Acquistions – All About Detroit – Then and Now

As summer comes to a close, I thought to share with readers a number of recent acquisitions that are notable because of their interesting ties to Detroit. The first, comes out of the tradition of vernacular photography. Back in June, Brad and Ellen Iverson gifted a number of prints to the museum that Brad had made from old negatives dating to the early 20th century. Vernacular photography is a growing area for collectors, and several museums including the National Gallery of Art have organized exhibitions around some of the work that falls into this category. You’ve probably seen these pictures in those old remnants from the pre-digital era – the forgotten family photo album. Or maybe you’ve stumbled across boxes of pictures in local flea markets or even garage sales.  If you take the time to forage through them, these photos will stop you for a second or even longer – maybe its a curious composition, an unusual pose, or something else unique or peculiar that you can’t quite put your finger on.

Over the years, Brad researched the work and discovered Detroiter Wendell Hotter was responsible for taking the photographs seen here. Hotter dabbled in photography over the years making portraits of friends and family, as well as businesses and a few local landmarks around the city. The photographs date from around 1910 to 1930 and are evidence of some faraway personal slice of history and the people and places that existed over a century ago.

Another recent gift that relates to our local cultural history, more so from the underground and certainly eclectic, was created by the collaborative team The Upholsterers (Brian Muldoon and Jack White), who, in addition to their forays into upholstering and fine art editions, have pretty well-known reputations around town and elsewhere as musicians (Brian is a drummer with The Muldoons; Jack plays with The White Stripes and more recently has been on tour with a new muscial project The Dead Weather).

Made around 2000, Brian and Jack put together about 500 official editions that include multiple pieces: business cards, a fabric sample along with a three-panel story board of Brian and Jack refurbishing a vintage chair.  But the whole piece really fronts as an elaborate jacket for an old-school 45rpm vinyl disk with rare recordings by the duo. Incidentally, photographs on the cover and the inside story board were taken by Steve Shaw an old college photo buddy of mine who also happens to be a fellow DIA staffer and guitarist for The Fondas.

Past summers have seen other Detroit-related material finding its way into the collection. Last year, local photo guru Bill Rauhauser presented the museum with a large and coveted gift of his most memorable work. The photographs document the city from 1950 through the 1980s. And in 2006 collector James Duffy, well known for his support of many Detroit artists, bestowed over 400 black-and-white photographs to the DIA. Duffy took the pictures around 1976 to document old storefronts and businesses mostly on Detroit’s eastside. It’s likely you will see these treasures in upcoming exhibitions at the DIA and in future posts.

Queue for Robert Frank's Lecture at the NGA, March 26, 2009 - photo by Michelle Andonian

On Thursday afternoon, I, along with over 800 others, ended up in the nation’s capitol for a rare program with photographer Robert Frank and the National Gallery’s curator of photographs, Sarah Greenough.  Frank rarely makes public appearances, so it was an opportunity to listen and learn first hand about his photographic work, which currently is the subject of the fine exhibition Looking In: Robert Frank’s The Americans. While discussing several iconic images from his oeuvre, Frank humbly remarked, “It was a very good day for photography.”

Outside the NGA - photo by Michelle Andonian, 2009

In their hour-long conversation, Greenough and Frank discussed his photography, influences (Bill Brandt and Walker Evans in particular), his love of America, and, most notably for me, a 1955 trip to Detroit to photograph what Frank referred to as “God’s Factory” – the Ford Motor Company’s River Rouge Plant in Dearborn, Michigan. For Frank, the automobile was an important part of the American dream, and he saw it everywhere. He thought it would be a good idea to see the place where cars were made and photographed at the factory for two or three days. It was difficult but worth it. The images were used in a number of his publications over the years including The Americans.

In March 2010, the DIA will open an exhibition of Robert’s Detroit work from 1955. It will be the first time these photographs will be on view to the public and an opportunity to see Detroit and the famous Ford factory the way Robert Frank experienced it at mid century.

In the Company of Artists Photography Exhibition – Andy Warhol

Posted on December 23, 2008 by nancy barr photocurator | Leave a comment 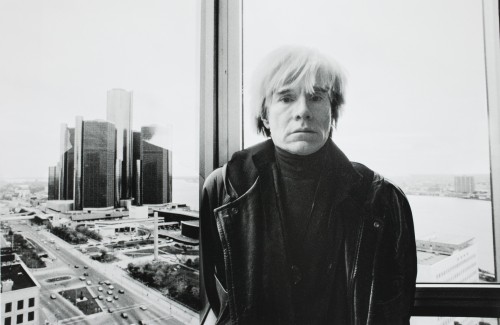 In November 1985, Andy Warhol traveled from New York to Detroit promoting his new publication America with a scheduled stop at the DIA for a special book signing. Warhol took time for an interview with Colby and staff photographer Michelle Andonian joined them along with Warhol’s assistant Christopher Makos. The group had breakfast on the top floor restaurant of the Ponchatrain Hotel where Warhol took in the view of the city (he later remarked in his diary that Detroit was so sprawling, it reminded him of Los Angeles).

At one point in the conversation, Warhol referred to Detroit’s most recognizable riverfront architecture as “that interesting sculpture over there.” Taking a cue from the world’s most famous pop artist, Andonian suggested a quick portrait with the so-called “sculpture” – the Detroit Renaissance Center – as a backdrop, and Warhol agreed.  The photograph is a recent gift from the artist to the DIA’s permanent collection and currently is on view in the exhibition In the Company of Artists.

This portrait along with over 90 others will be on view in the exhibition through February 15, 2009.

In the Company of Artists opened at the DIA yesterday and the de Salle gallery saw a veritable a-list of Detroit-area photo legends taking in the exhibition. Bill Rauhauser was one of the first into the gallery where a number of his own portraits of artists are on view including a very dapper self portrait by Bill from the 1950s.

Oakland Community College photo guru Rob Kangas was on hand to see the exhibition along with Michelle Andonian and legendary architectural photographer Balthazar Korab.  Our general public seemed to enjoy the exhibition as well – the first permanent collection exhibition to grace the galleries in nearly seven years!